The first set of results of a Behaviour & Attitudes survey conducted on behalf of Transparency International (TI) Ireland indicate that the vast majority of Irish employers are supportive of whistleblowing but indicate that more needs to be done to raise awareness of legislation introduced in 2014 aimed at protecting whistleblowers. Most employers surveyed also said they did not have any procedures in place to channel reports from their staff or to protect those who speak up.

The Integrity at Work Survey is part of a new programme launched today by the Minister for Public Expenditure and Reform, Paschal Donohoe T.D., which is aimed at promoting safer working environments for people who speak up about wrongdoing.

More than nine out of ten [95%] employers said that it is in the interests of their organisation or industry sector for people to speak up about wrongdoing. The number of employers supporting staff that reveal confidential information drops slightly to 91%. A smaller number [79%] say that they would hire or consider hiring someone who had blown the whistle on wrongdoing in a previous job. However, only 64% would encourage an employee to report wrongdoing where the disclosure might harm the reputation of their organisation. The survey also indicates that the majority of employers [66%] have no procedures or policies in place to protect whistleblowers or to channel their reports to the appropriate person.

Commenting on the results of the survey, Minister Donohoe said: ‘It’s encouraging to see that employers have a generally positive outlook on whistleblowing. Nevertheless, these results suggest that much more needs to be done to raise awareness of the Protected Disclosures Act and to ensure that organisations have measures in place to act on reports from their staff and make sure that whistle-blowers don’t suffer as a result of their disclosures. A primary aim of the legislative framework that the Government put in place for Protected Disclosures in 2014 is to ensure that workers feel safe when speaking up’.

The survey also shows that organisations need to work on assuring their staff that reports of wrongdoing will be acted upon and whistleblowers will be protected. Although 93% of employers state that a report of wrongdoing would be acted upon and their staff would not suffer as a result of doing so, less than half of all employees said they felt safe reporting a concern or believed that their reports would be acted on by their employer.

‘There seems to be a gap in levels of trust among employers and employees that wrongdoing will be acted on or that workers will be safe when speaking up. Our initial findings as well as international data show that these are the two most common reasons why people don’t speak up when they see wrongdoing. This gap in trust, combined with relatively low levels of awareness of the PDA, and the lack of workplace procedures, are key reasons why we are launching the Integrity at Work initiative and the Transparency Legal Advice Centre’, said John Devitt, Chief Executive of TI Ireland.

The aim of the ‘Integrity at Work’ (IAW) initiative is to promote positive cultural change within Irish workplaces and implement the broader policy intentions of the PDA by engaging employers, employees, trade unions, and regulators in a number of ways:

Funding of €300,000 has been provided by the Department of Public Expenditure and Reform in 2016 to seed fund the initiative.

TLAC is an independent law centre that provides free specialist legal advice to people who have made disclosures of wrongdoing or are considering doing so. It is a registered charity and regulated as an independent law centre by the Law Society of Ireland. It has been established and is supported by TI Ireland. The law centre offers legal advice as appropriate to callers to the Speak Up helpline, which was launched in May 2011 and has provided advice and support to over 800 people to date.

The Integrity at Work Survey is aimed at setting a benchmark that will help measure the impact of PDA as well as awareness and capacity building programmes for employers and employees. Future polling will take place every two years to measure progress from 2016. The complete findings of the 2016 survey will be published this December.

The Integrity at Work Survey is the first national survey of attitudes to, and experiences of, whistleblowing among employers and employees in Ireland. The survey was conducted between July and September 2016, with 450 employees and 350 employers polled by Behaviour & Attitudes. An additional 450 employees have been surveyed but the results from the second poll have yet to be analysed. The complete results of the employee and employer surveys will be published in December 2016.

Key preliminary findings of the Integrity at Work Survey 2016

Employers are generally supportive of whistleblowing: 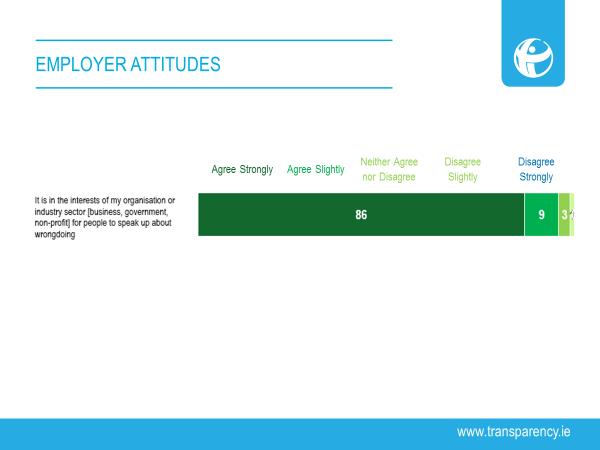 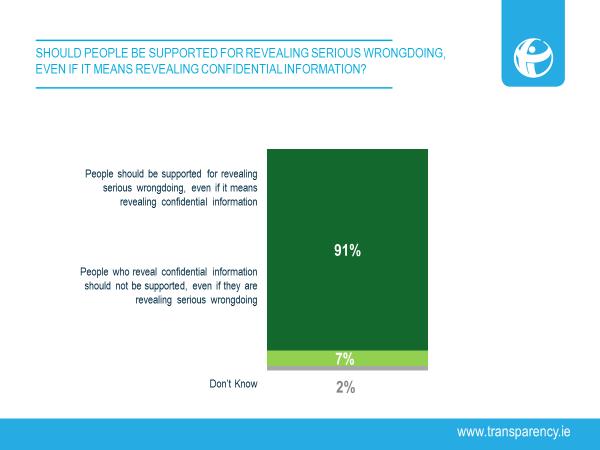 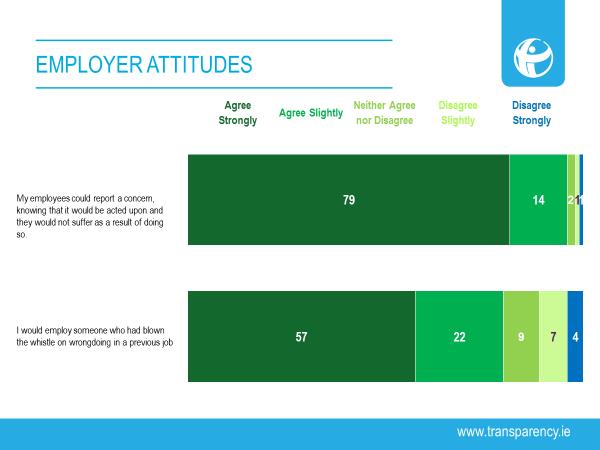 Support for whistleblowing among employers is less certain when employers are asked if they would encourage an employee to report wrongdoing where the disclosure might harm the reputation of their organisation. Only 64% said they would be either very likely or fairly likely to do so. 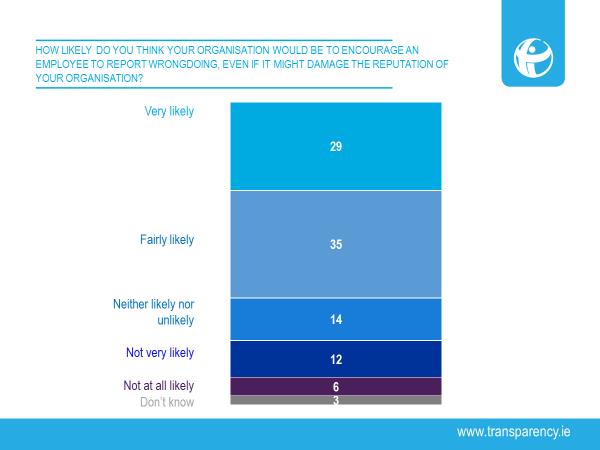 Organisations need to work on assuring their staff that reports of wrongdoing will be acted upon and whistleblowers will be protected. 66% of employers said they had no procedures or policies in place 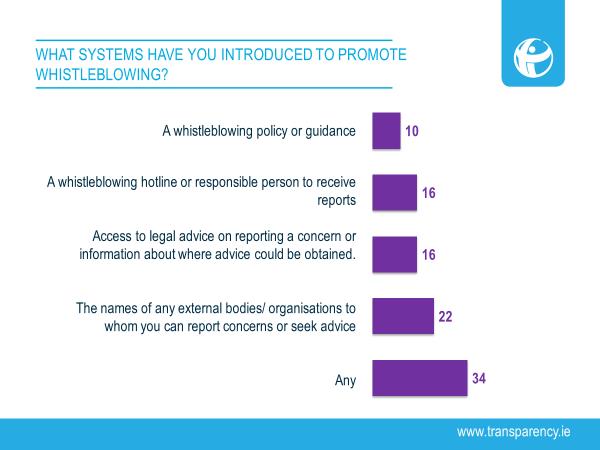 Most employers have a limited understanding of the PDA and more needs to be done to promote awareness of it. 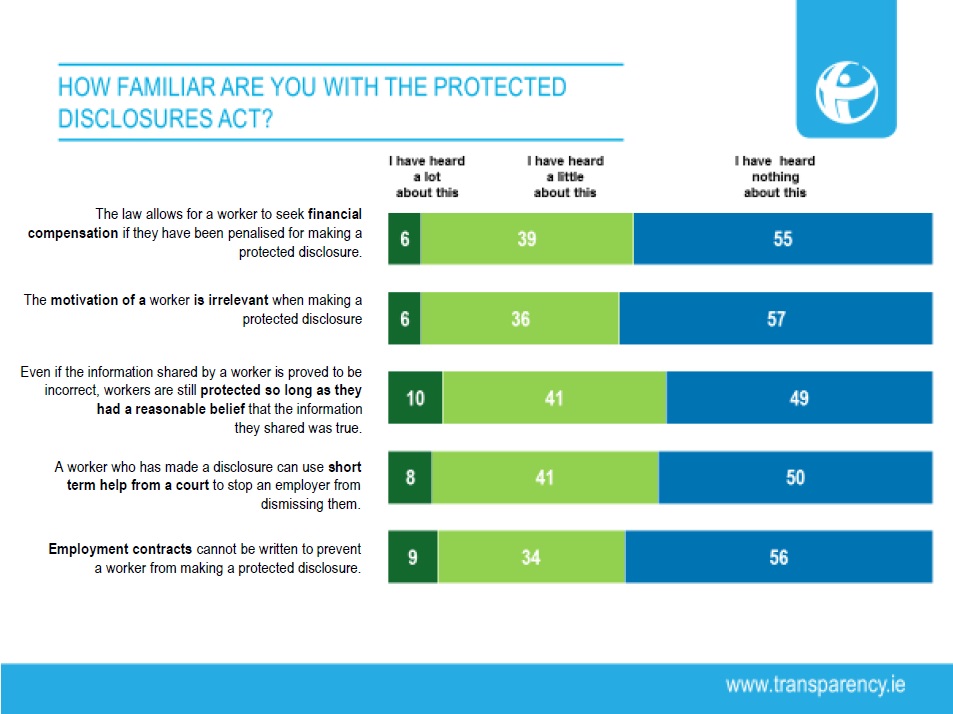