Transparency International Ireland (TI Ireland) has repeated its call for the Government and opposition parties to make the fight against corruption a political priority, as it launches the 2020 Corruption Perceptions Index (CPI) today.

Ireland’s position on the CPI has worsened marginally since last year, with its score falling from 74 to 72 points out of 100. Countries that have more points out of 100 are perceived to be the least affected by public-sector corruption. The CPI ranks 180 countries based on perceived levels of corruption and Ireland’s score is based on the findings of seven surveys, conducted by international think-tanks and political risk agencies. 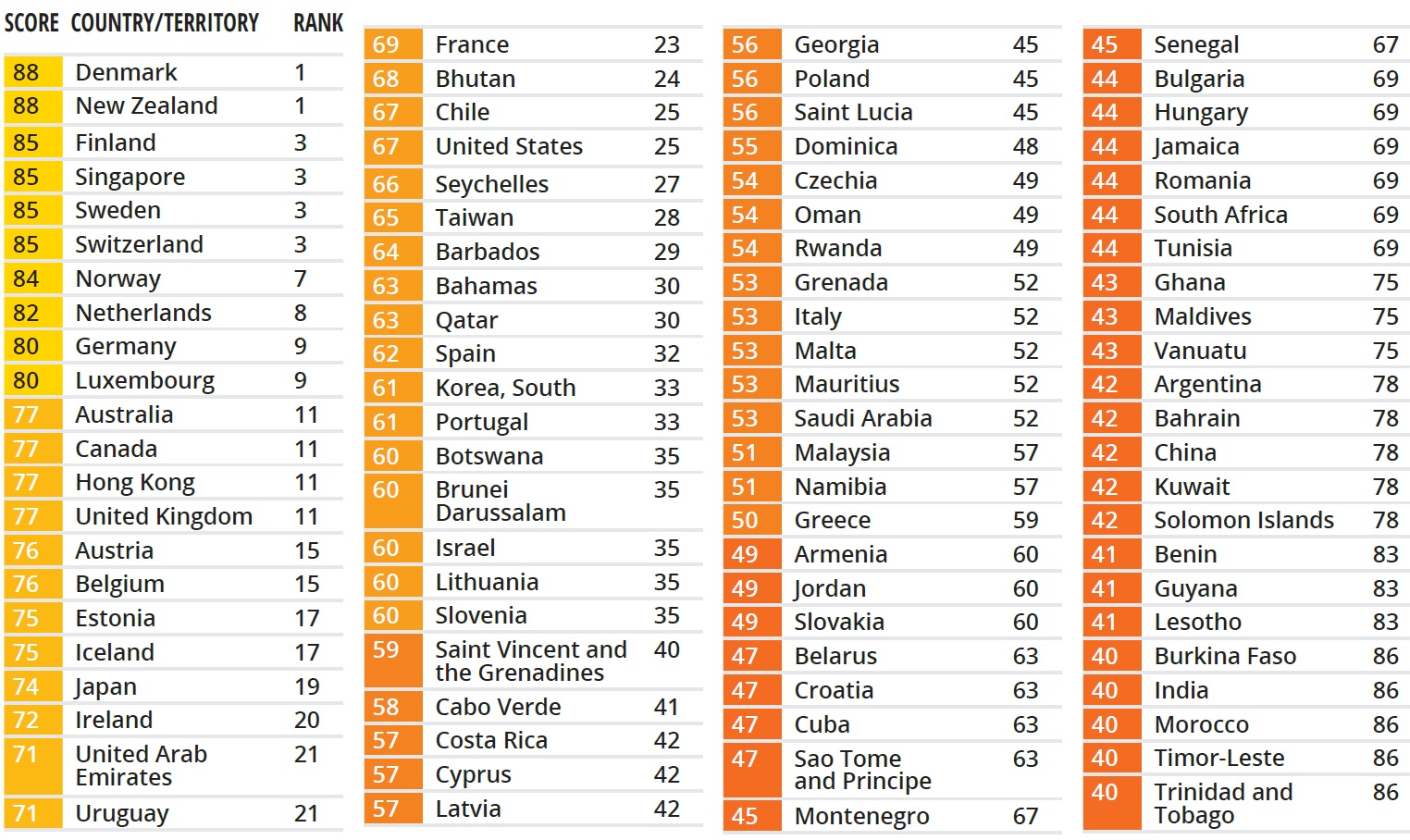 ‘Corruption can be as insidious as any disease and the impact it has around the world on the most vulnerable in society, on healthcare systems and public trust in democratic institutions has been particularly evident over the past year. The Covid-19 pandemic and the rise of the far-right across Europe and the US has exposed how vulnerable our institutions and democratic norms are to declining trust in government. This trend needs to be reversed if we are to fully address these new threats, but that trust needs to be earned’, said John Devitt, Chief Executive of TI Ireland.

Ireland has also fallen to 20th from 18th position on the index and is still considered to be affected by corruption to a greater degree than most of its northern European neighbours. Denmark and New Zealand retain the top spots on the index and are perceived to be the least corrupt countries this year with a score of 88 out of 100. Somalia and South Sudan are considered to be the countries most affected by corruption with a score of 12 out of 100. 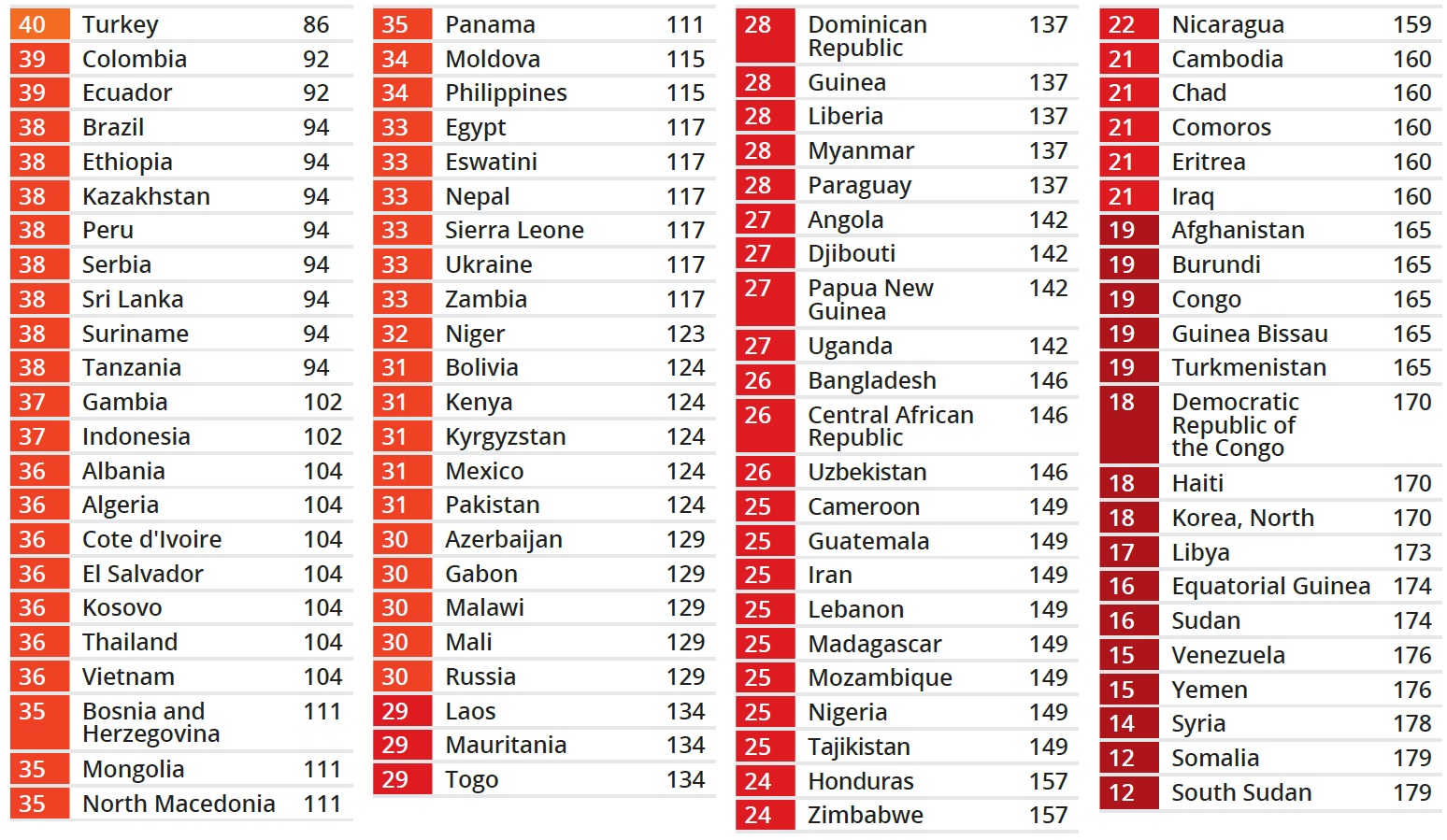 ‘While Ireland is not confronted with corruption to the same degree that has plagued some of the world’s poorest and badly-governed countries, it should be remembered that it’s not that long ago that the Mahon Tribunal described corruption as ‘endemic’ in Irish politics. We cannot afford to be complacent’.

Some welcome changes and reforms have been made since then but many of the recommendations of that Tribunal, and most importantly, the Public Sector Standards Bill, have fallen by the wayside. Politicians from both government and opposition need to see the restoration of this Bill and our participation in initiatives such as the Open Government Partnership without delay’, added Mr Devitt.

TI Ireland has welcomed the publication of the Hamilton Review on measures to tackle ‘white-collar crime’ which should lead to the development of a national anti-corruption strategy and other initiatives recommended in its submission to the review. It has also proposed the creation of an independent Anti-Corruption Bureau that would be dedicated to investigating political corruption and related offences. In the meantime, TI Ireland has called for the provision of additional resources for the Garda Economic Crime Bureau and its Anti-Corruption Unit.

In addition to the recent analysis of data from its Speak Up Helpline and whistleblowing experiences, TI Ireland is due to publish its report on measures aimed at promoting transparency and tackling corruption in 30 Irish companies next month. The ‘National Integrity Index – Private Sector’ study follows a similar analysis published in 2019 and 2018 on local authorities.  It will also publish its first analysis of measures aimed at tackling the laundering and of the proceeds of international corruption, titled ‘Safe Haven?’.